Beyond The Call Of Duty: “Woody” Williams always went above and beyond to serve his country and his fellow veterans well

Hershel Woodrow Williams was born on October 2, 1923, in a small West Virginia town, and he has made such an impact on the country for decades.

Raised on a dairy farm in Quiet Dell, Hershel – better known as Woody – was the youngest of 11 children. He worked odd jobs here and there, including being a Civilian Conservation Corps enrollee in Montana, but nothing was more rewarding or important to him than enlisting in the armed forces when he was 19 years old.

Woody went to boot camp at the Marine Corps Recruit Depot in San Diego, and upon graduation he was assigned to the 32nd Replacement Battalion in October of 1943. Thereupon he was deployed for the first time on December 3, 1943, abroad the M.S. Wetley Reden.

He had a very decorated career, and with his passing last week on June 29, 2022, Woody is leaving behind a legacy that will be remembered for generations to come.

“For many years, I have had the good fortune to know my friend and brother US Marine and Medal of Honor recipient Hershel ‘Woody’ Williams, which he earned during the battle of Iwo Jima in World War II,” Michael Emerson, AMVETS Post #1947 Commander and Marine veteran, said. “At my invitation, Woody joined our AMVETS Post #911 in Hayward, California, after I chartered the Post in 2013. Later, Woody transferred to my new Post #1947 in Stockton, California, that I chartered in 2019.

“In addition, I worked with him to build the 29th Gold Star Families Memorial Monument, which he founded and designed, in Hayward, California in 2017.”

Throughout his decorated career – which included reaching the ranks of corporal and receiving a Purple Heart as well – Woody was the lone survivor of a multi-pillbox raid, in which he single handedly took out a number of these pillboxes over the course of four hours while only being covered by four riflemen. This earned Woody his Medal of Honor mentioned by Emerson while allowing him enough time to also see the two flags raised on Mount Suribachi.

Woody then earned his Purple Heart five weeks later for doing all this and continuing to fight through the rest of the five-week-long battle with fragmentation in his leg.

When the battle got tougher, so did Woody, as he never stopped fighting for his country, and his fellow Marines and countrymen are all thankful for him.

“Woody also invited me to the christening of a US Navy Ship named after him, the USS Hershel ‘Woody’ Williams in San Diego, California, on 21 Oct. 2017,” Emerson added. “Woody worked hard all of his adult life to honor, remember and help all veterans and their families. Woody was an amazing man with a remarkable life and legacy. Everyone who knew ‘Woody’ loved him. The AMVETS organization and our Post was lucky to have ‘Woody’ as a Life Member. Semper Fi and Rest in Peace Woody.”

To have a Navy Ship named after you is remarkable, especially when you were in another branch of the armed forces. But, that is the impact Woody made throughout his time in the service and well-beyond.

Woody never stopped serving even after he retired, and that is why he started the Hershel Woody Williams Congressional Medal of Honor Education Foundation, Inc. in 2010. Its mission is “to honor, recognize and serve Gold Star Families and the legacy of their Loved Ones who have paid the ultimate sacrifice.” Former AMVETS National Commander William Kilgore said the foundation is responsible for establishing 38 Gold Star Families Memorial Monuments across the US with 41 additional monuments underway in 37 states.

No matter how you look at it, Woody has created a legacy that will probably remain unmatched until the end of time, and he is someone who people were always pleased to talk to as well, as he was one of the most respectable – albeit well-respected – people anybody has ever met.

“I first met Woody in 1990 at the AMVETS Breakfast at the Inauguration for George H.W. Bush,” Kilgore said. “I was a table host for General Brady of US Flag desecration fame. Woody was at the next table. I talked with him at many of the [Medal of Honor] breakfasts over the years. I attended them in 1990, 1997, 2001 and 2005. He was a great ambassador for Veterans causes and later for Gold Star families. I helped raise funds for the Gold Star Family Memorial erected at our Veterans Memorial in Kingsport, TN. These Memorials are his legacy – he really cared for those who were the real heros of combat, those who didn’t return and their families who gave the most.”

Woody was a veteran who was a man of the people and who truly cared about all armed services.

Everyone who talks about Woody has nothing but amazing stories to tell and awesome things to say about him, and that is why AMVETS chose him for the July 2022 Veteran of the Month honors. There are not many people who have made the impression on the Marines that Woody made and made it as far as he did (98 years!) to continue to tell his story.

In fact, he was the last remaining recipient of a World War II Medal of Honor alive, which goes to show his longevity.

“Woody is not only a shining example of a Marine, but of the veteran community,” AMVETS National Commander Greg Heun said. “He was a life member of AMVETS and 2019 AMVETS Silver Helmet recipient. More so, he and his foundation worked tirelessly for veterans and their families. There will truly never be another like Woody, and he will forever be engrained in our AMVETS family.”

Gone but not forgotten. Thank you for your service, Woody. You will be greatly missed! 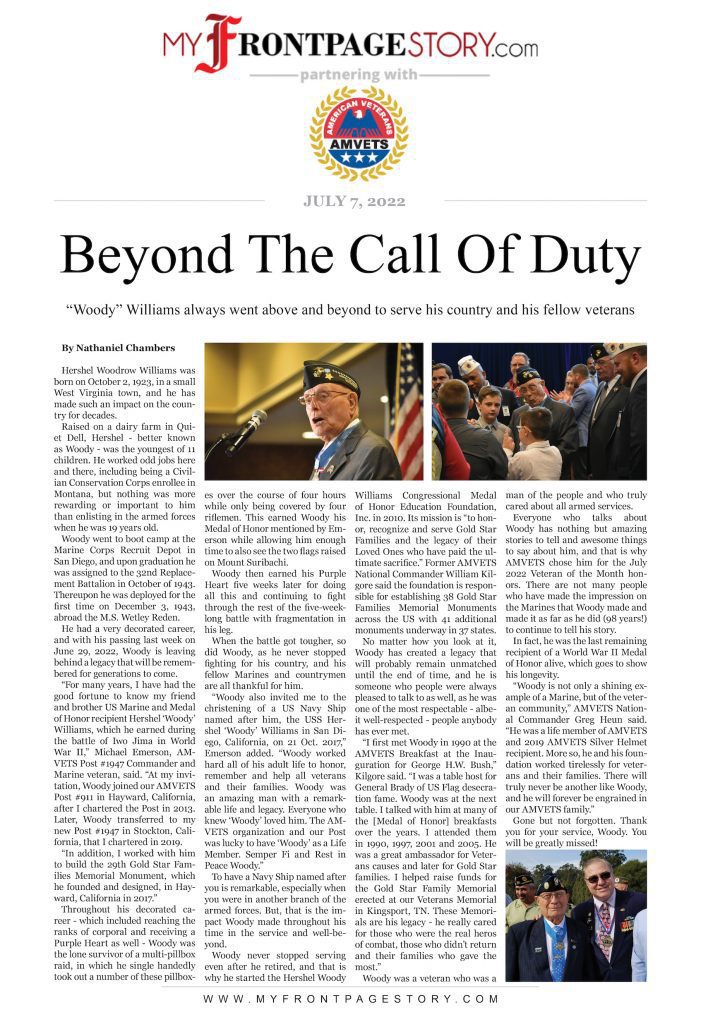