‘Lifetime Lover’: Lisa Sylvester is David’s best friend, a dedicated wife, and a selfless mother to Stephen and Nicole

David Sylvester knows how rare it is to be as passionately in love with his wife, Lisa, as he is after 32 years together. He also recognizes that, while they are different people with different strengths, they share the same core values when it comes to love, their relationship and their family. Lisa is David’s rock, just as she always has been to her kids, Stephen (30) and Nicole (29).

The passion and friendship that David and Lisa share doesn’t just happen. They work together and have complementary strengths that tend to bring out the best in each other. David feels lucky and blessed for that, and he gives much of the credit to Lisa because she loves unconditionally and always puts David, the kids and countless others first.

Lisa is the type of woman whose empathy elevates those around her, especially David in the way he treats other people and tries to be the best husband and father he can be. It’s hard to be in Lisa’s presence and not be inspired to try harder or do more in service of others.

“She’s just a really empathetic, loving, kind human being,” David said. “She’s a really sweet person. People will go out of their way to tell her that. I think she’s helped me become a little more empathetic with people, and I think she’s also helped me just in becoming a better listener and probably a better partner.”

When it comes to their love, lucky is a word that David likes to use because he has found a partner who is always willing to make the same investment as he does. Their marriage, through their ups and downs, has always been a two-way street where they communicate, find middle ground and always know they can count on each other.

At the same time, their love for each other is about so much more than the day-to-day maintenance that goes into parenting, living together and maintaining their home. They are able to handle those duties as partners while balancing a sincere love and admiration for each other.

“I think it starts with a really deep trust that we have,” David said. “We sort of see things very similarly. We see the big things. We’re different in a lot of ways, but the big things we see similarly. We are very lucky, I think, that we still have our passion and it’s as strong as it was when we were first together. When you’re married as long as we’ve been married, it’s hard to keep that.”

Lisa’s parenting always mirrored the way she chose to look at life, too. She was invested in Stephen and Nicole and was always dialed in to their school, their activities and their friends. When her kids spoke, she engaged and she listened, which is just as true today now that they are adults.

Lisa pours her focus into everyone in that way, which is one of the things David admires most about her. She is a great listener who is always paying attention, always being considerate and always giving her best effort.

“She was a very plugged-in mother,” David said. “It was always love and concern. She really does have a rare ability to be interested. To this day, she is extremely interested in everything our children do, and she’s that way with everybody.”

David knows that not every husband is lucky enough to be able to lean on his wife anytime he needs her. He is proud of the love they share and the way Lisa has fought through adversity and always stayed committed to family.

From the time he saw Lisa at a lingerie party now, David has known at least one thing to be true: He has only ever wanted to be closer to Lisa. That’s as true after 32 years as it has ever been.

“I wrote a song for her called ‘Lifetime Lover,'” David said. “That’s how I see her. She’s my lifetime lover and the best mother I’ve ever known.” 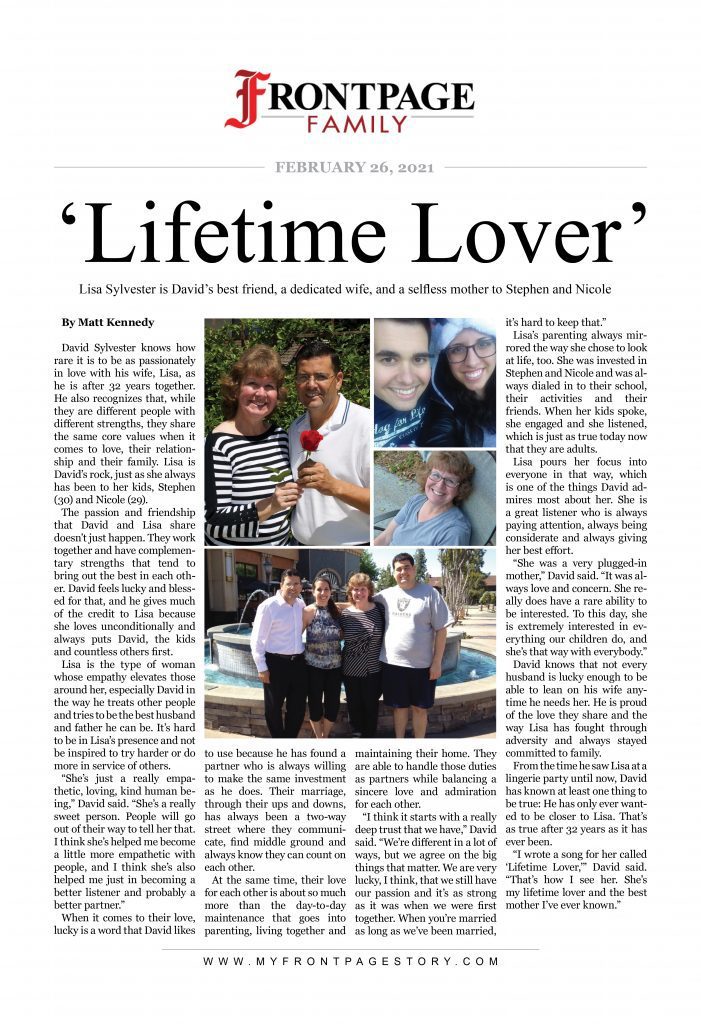