‘Mama Bear’: Amanda Estes is loving and supportive of David and her kids, but always ready to fight for them 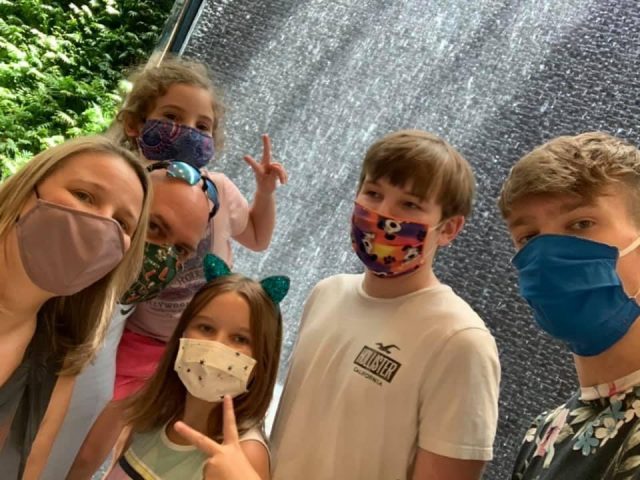 Amanda Estes runs a tight ship…but she does it with a soft touch.

With a demanding full-time job, running a disciplined household is an absolute must for Amanda. Especially when that household includes one fiancé — David Mach — four kids, two dogs and four cats.

But Amanda does it all with patience and love. She is the linchpin in the family that she and David have created – a blended unit that is made up of her three children and his daughter from previous marriages.

But there are no “stepsiblings” in this family.

“Amanda has made sure her little girl Lexie and her boys have treated my daughter Cari as a sister; not as a stepsister, not as an intrusion into their lives — more as part of the family,” David said. “Amanda is the real glue. She’s the one that that makes sure we’re all on the same page, whether it’s having fun together or doing the chores or doing the other work that we need to do.”

David knew that Amanda was the one for him soon after meeting her.

“She is the first and the last person that I found on eHarmony,” he said. “We clicked right away.”

David and Amanda didn’t introduce their kids to each other for a couple of months after they started dating.  They waited a year and a half before considering moving in together and blending their families.

Since joining households in 2019, it’s been fairly smooth sailing.

“It’s been great — no hiccups, no arguments,” David said. “There are little fights here and there but nothing that lasts longer than 5 or 10 minutes, then everybody is on the same page again and hugging it out.”

Even their menagerie of cats and dogs get along. This includes a new puppy that the family adopted together.

Working outside the home and running such a busy household takes a sense of focus and discipline that Amanda almost certainly gained from her upbringing.

She was born in Tucson, Arizona, and her parents Sue and Mick both served in the military. As in most military families, they moved around a lot based on where they were posted, meaning Amanda and her brother Michael spent time living in Portugal when they were young children, before moving to Oklahoma, and then to Panama when Amanda was in high school.

Besides discipline, that experience also forged in Amanda a sense of strength and resiliency that she works hard to instill in her children, who she always puts first.

David calls Amanda a “Mama Bear” who will even scold him if she feels he is being too tough on the kids.

“Even if it’s over something they really need to get better at or they didn’t do something they were supposed to. Even though she might know I’m right, she’ll come out with her claws and defend them, and as long as you don’t get scratched it’s a real endearing quality,” he laughed.

“She is very willing to discipline her own children but will protect them ferociously from attacks by outsiders,” he continued. “She loves and cares deeply for her family. She is very loving and patient but also able to lay down the law when needed — and it is needed often.”

“She hates when we’re lazy,” he admitted. “Whenever we’re being lazy, she tries to snap us out of it, to get up, do something and not be so lazy all the time. She tries to motivate us, get us to be hard-working kids, do our school work on time, that kind of stuff.”

But she also knows when to let go and allow her kids to be kids.

“I’d say that she’s very lenient and giving, so she lets me go out and do all these fun things,” said Kaleb. “She’s willing to give me money for things. She spoils us. I really appreciate that. She’s very generous and nice and just loving. She’s just a good mom.”

And like every good mom, that sometimes means making a sacrifice for the good of her kids.

Going into retail after college, Amanda had worked her way up through management at The Gap and then at Victoria’s Secret, where she is now an executive analyst.

With her experience and business acumen, Amanda could have climbed as high as she wanted on the corporate ladder, but she decided to take the analyst position that allows her to spend more time with her family.

Now, she wakes up every morning at 5:45 to get to work early so that she can leave the office and be there for the kids after they get home from school.

“She really likes math,” said Lexie, 10. “When I’m having trouble with math, she always helps me. And I’m really starting to love math now.”

Amanda loves preparing dinner for David and the kids, and 15-year-old Colin praised her kitchen skills.

“She’s a great cook,” he said. “She makes Butter Chicken, which is really good. And Chicken Parm.”

Amanda also likes baking cookies, cupcakes and muffins with Lexi and Cari, 9, and doing crafts with the girls with her handy Cricut.

A recent mother-daughter craft project was especially meaningful for Lexie.

“She’s actually getting married and we were doing the ‘Save the Date’ cards,” Lexie said. “We’re doing molds with seashells in it. I’m just helping her with that.”

Watching as Amanda shares her precious spare time with the girls warms David’s heart – especially when he sees how patient Amanda is with Cari.

“She knew what she was getting into and when we started a relationship and when we moved in together and she’s been a great stepmom to Cari,” he said. “That means the world to me.”

Hardworking mama bears need to let their hair down too. So when Amanda isn’t working or taking care of David, the kids and their pets, she likes to watch British television series like “The Crown” and “Downton Abbey” as well as cooking competition shows.

“She loves the beach and fruity cocktails and letting loose too!” David said.

But most of all, Amanda loves spending time with David and the kids, who had special Mother’s Day messages for their Mama Bear.

“I definitely want her to know how much we appreciate her for everything she does and all the stress she has to go through with work, and just to let her know we appreciate her and love her very much,” said Kaleb.

“She’s the best person that I could even think of,” Colin said. “She’s great, truly.”

“She’s cool, sweet, nice and I think you already know that,” Cari stated matter-of-factly. “She does trips with us. She eats with us too. And she loves the same color as me, just pink.”

As for Lexie, she wants her mother to know what a great example she sets.

“I love her very much,” Lexie said. “I love that she does so much for us, and I hope one day I can be as great of a mom as she is.” 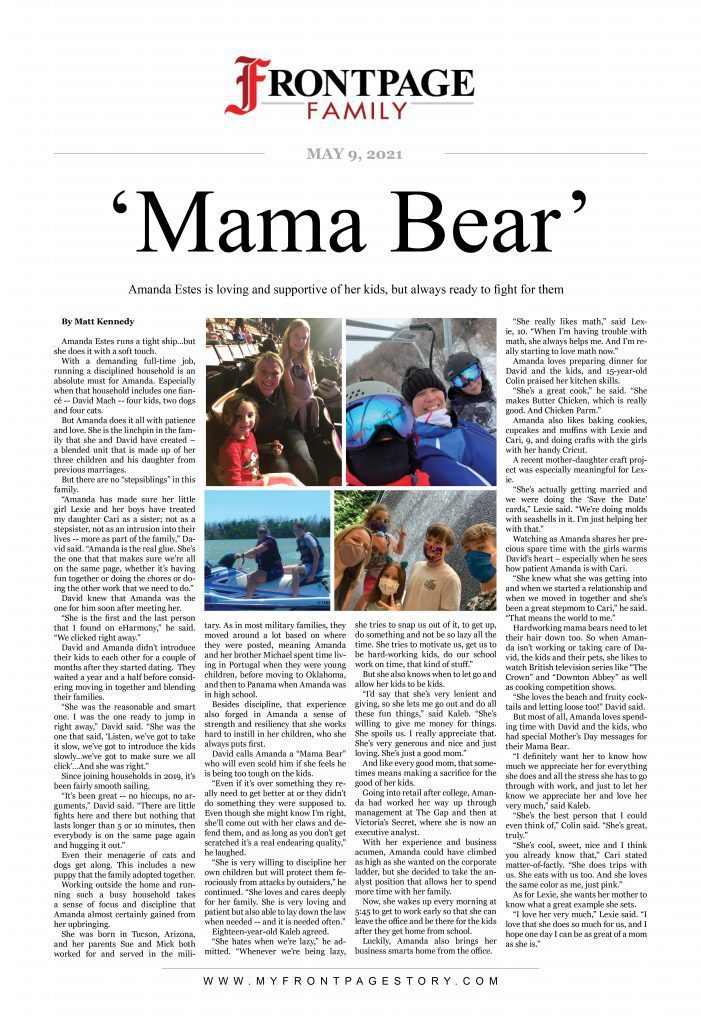