‘Supermom’: Deborah Thomas leads her family with hard work and persistence without skipping a beat 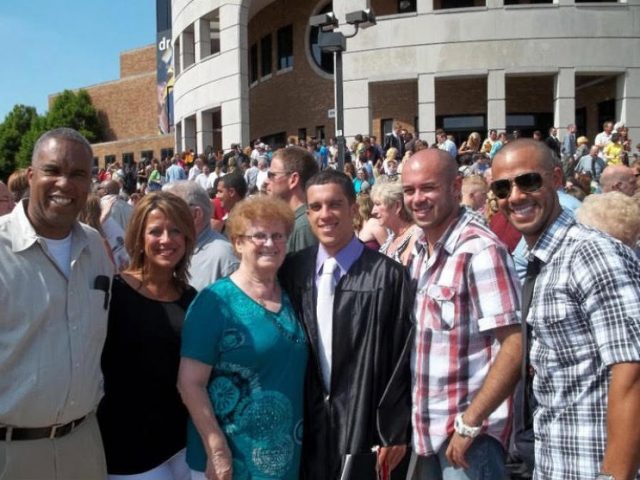 Deborah Thomas has never been one to take no for an answer. It’s one of her many unique charms and the driving force behind a strong woman who has never stopped fighting until goals are reached and her family is cared for.

Deborah set the example, and her three boys Pablo, Joshua and Dylan all followed. Not just because they were told, but because they had too much respect for their mom not to. Deborah worked hard and sacrificed to help them thrive, and that fact was never lost on them.

“The most important thing, I think, was no matter what she had to do, she always had time for us,” Pablo said. “Discipline and leadership were big in our house. She was busy balancing working a full time job, an on call job and was also in the military, but she was always around for us and she made ends meet.”

In a lot of ways, the Thomas family was rooted in military values. Deborah had over a decade of service time and reached the rank of E7 Sergeant First Class in the Army Reserves. Her husband Harold was also a National Guardsman who served as a military police officer.

Their middle son, Joshua, followed those footsteps by serving in the military and completing 2 tours in the U.S. Coast Guard.

That background showed up in how Deborah taught her kids, but also in the task of simply getting the job done every day. She had to be on top of her planning game to make sure practices, activities and rides were all accounted for.

The goal: Conquer one day at a time.

“It was challenging,” Joshua said. “She had three boys and all of us were into different sports at the same time. Getting somebody to practice on time was a big stretch, then you realize getting three people to three different practices on time, that’s pretty tough. She was on schedule and planned. That’s one thing Mom is to a ’T.’”

The unflinching focus Deborah showed in those situations stood out to her youngest son, Dylan.

The lesson he learned was to never quit until the task was complete. It’s a lesson Deborah continues to teach by example even now through her quest for a degree in nursing that is now just a handful of credits away from becoming a Master’s.

No matter what life threw at her, Deborah never stopped taking steps in the right direction.

“She taught us just to never give up,” Dylan said. “When things get hard or jobs get stressful, you always put forth the best effort you can. If something doesn’t work, make sure you have something lined up afterward. She taught us to do your best at any craft you have going on.”

Deborah’s family would be quick to point out the fine line she can walk between that type of persistence and outright defiance. Her first encounters with Harold were marked by both.

The first time he approached her for assistance logging a troop’s late-night arrival, she slammed a door in his face.

The next meeting ended in a shower of gravel as Deborah blew through Harold’s attempt to stop her from driving off base. A tornado had blown through Camp Perry and Harold and all troops were instructed to not leave their quarters.

But if the tornado threat wasn’t going to stand in her way, what chance did Harold have?

“Deborah was with some friends at a building totally unaware a tornado had come through,” Harold said. “They decided at that point they were going to go off post. I’m at the gate, and a little convoy of cars starts coming through. Deborah was in the lead of the convoy.

“I put my hand out to stop her. I said, ’Sergeant, by order of the Provost Marshal, all troops are confined until further notice.’

“She said, ‘Why?’ I said again, ‘By order of the Provost Marshal.’ She didn’t listen. She put the pedal to the metal and I was eating gravel for about two minutes.”

Weeks later, Harold and Deborah left their posts at Camp Perry and went home, which just happened to be the same town in Kent, Ohio.

They ran into each other there, and after he briefly explained away concerns he was stalking her, Harold convinced Deborah to come over for dinner and to bring Pablo and Josh with her.

Harold and Deborah were married in 1994.

“They became my life,” Harold said. 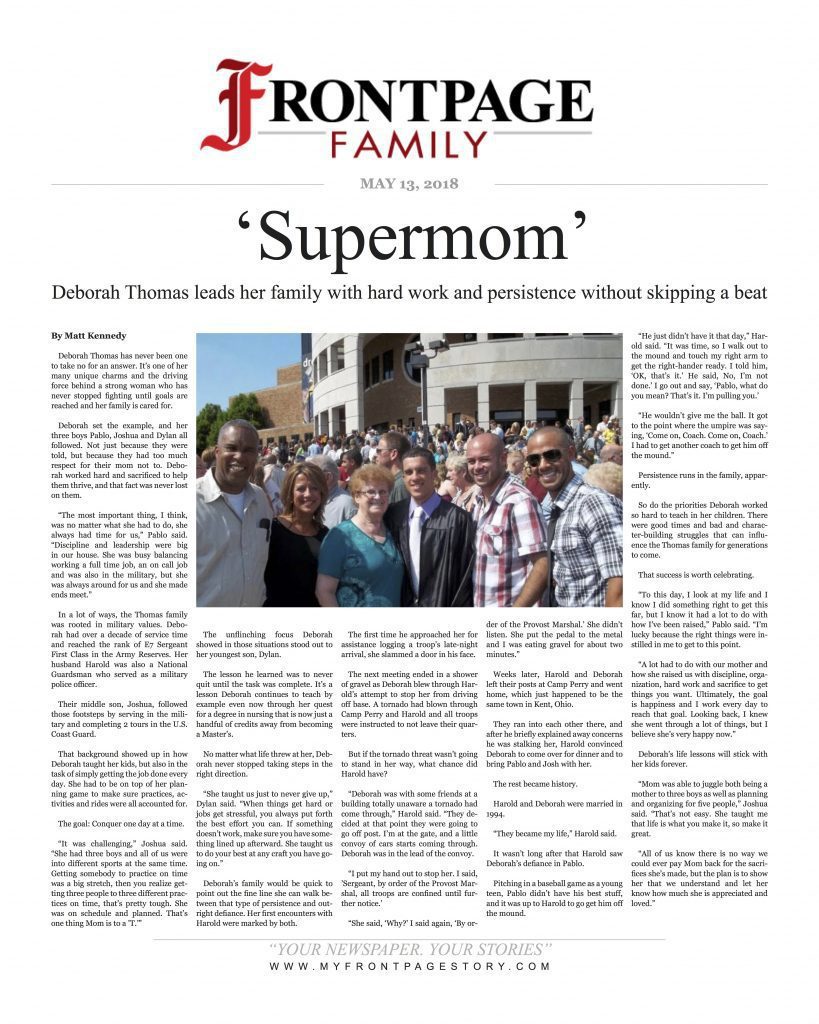 It wasn’t long after that Harold saw Deborah’s defiance in Pablo.

Pitching in a baseball game as a young teen, Pablo didn’t have his best stuff, and it was up to Harold to go get him off the mound.

“He wouldn’t give me the ball. It got to the point where the umpire was saying, ‘Come on, Coach. Come on, Coach.’ I had to get another coach to get him off the mound.”

Persistence runs in the family, apparently.

So do the priorities Deborah worked so hard to teach in her children. There were good times and bad and character-building struggles that can influence the Thomas family for generations to come.

That success is worth celebrating.

“To this day, I look at my life and I know I did something right to get this far, but I know it had a lot to do with how I’ve been raised,” Pablo said. “I’m lucky because the right things were instilled in me to get to this point.

“A lot had to do with our mother and how she raised us with discipline, organization, hard work and sacrifice to get things you want. Ultimately, the goal is happiness and I work every day to reach that goal. Looking back, I knew she went through a lot of things, but I believe she’s very happy now.”

Deborah’s life lessons will stick with her kids forever.

“Mom was able to juggle both being a mother to three boys as well as planning and organizing for five people,” Joshua said. “That’s not easy. She taught me that life is what you make it, so make it great.

“All of us know there is no way we could ever pay Mom back for the sacrifices she’s made, but the plan is to show her that we understand and let her know how much she is appreciated and loved.”