Love and positivity: Anne-Marie Arndt is selfless and compassionate and shares her positive outlook with the world 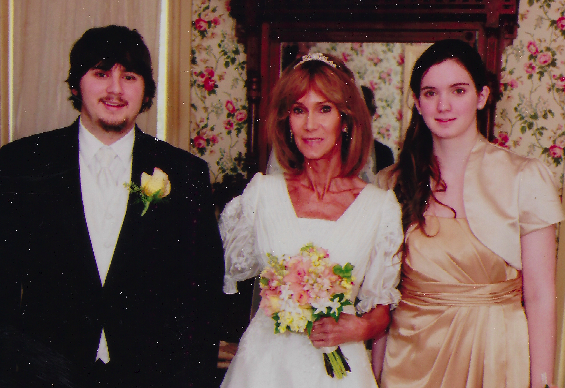 Anne-Marie Arndt first got her husband Bill’s attention with her love for cars.

She won his heart forever with her compassion and kindness.

Anne-Marie was honest with him from the day they met and showed a level of care and empathy that had him thinking marriage not long after he saw her amazing qualities in action.

Her profile popped off the page of an online dating site because of her beauty, her narrative about who she was, her love for Ford Mustangs and a quote that read, “When you get into a car and turn it on, it should return the compliment.” Anne-Marie sent Bill the first message and they were off and running.

“What I loved about her was, she was so engaging, so direct, so beautiful,” Bill said. “She had a great life story and knew how to tell it. She was a warm, wonderful, kind person. We started dating and hardly ever parted.”

Anne-Marie was even by his side from a distance when he fell ill with the flu within the first month they were dating.

Bill lived an hour away, but Anne-Marie made the trip back and forth without fail to nurse him back to health.

Bill couldn’t believe the efforts she made to help him, then found out Anne-Marie risked her life to do it.

“I didn’t find out until much later, she had this problem where she had difficulty driving at night,” he said. “She was driving at night to get to me. It was just amazing to me. She took such tremendous care of me.

“I couldn’t believe someone could be that kind to me. I knew I wanted to marry her. I felt close to her, and I loved her a lot.”

Bill met Anne-Marie’s kids, Evan and Julianne, on just their second date. They could see the potential in things to come and were moving at their own pace.

Anne-Marie was always honest and transparent with her kids, and she approached this situation the same way. She had faced her own personal struggles, but lived the advice she always gave and stayed faithful and positive.

“One of the most important things she taught by example was to just hang in there,” Julianne said. “Life may be rough at some points, but just keep working hard and keep looking out for yourself and the people you love, and eventually something good is going to happen.”

Anne-Marie has shown faith and tenacity, which are noble characteristics in their own right, but she never, ever compromised kindness or good manners. She taught her kids that “polite” and “headstrong” can work together.

“Both my sister and I ascribe to a very empathetic and charismatic worldview thanks to how she raised us,” Evan said. “I feel an innate need to be compassionate, understanding and supportive that definitely stems from her.

“She also taught me through demonstration over the years a careful balance of being polite and being headstrong that I truly value, and is something that I value in others as well.”

Loyalty is another word that cuts to Anne-Marie’s core, and it showed up big-time in the way she raised her kids.

Her commitment to them was unwavering. She guided Evan and Julianne when they needed it, but she also gave them enough rope to learn by making their own mistakes. That helped mold them into the people they are today.

“She was very supportive and encouraging of what we wanted to do,” Julianne said. “She encouraged us to explore our interests and pursue whatever it was, even if it was very random.

“I’m a huge hockey fan, so at one point at the ripe age of 15 or 16, I decided I wanted to try and play ice hockey. I didn’t know how to skate at all, but she encouraged me and was very supportive of me doing that.

“I did not become an ice hockey star, but I appreciated her support nonetheless.”

Support was something Bill felt immediately when he first met Anne-Marie. She showed it in all kinds of ways, not the least of which was her unrelenting kindness.

But it was clear to Bill right away that Anne-Marie lived her life with integrity and honesty, and he fell in love with that.

They met in January, and he asked Anne-Marie to marry him in April.

“She’s intelligent, and she’s beautiful,” Bill said. “She’s very principled, very honest, very forthright, and she is one of the hardest working people I’ve ever seen in my life and the most loyal person I’ve seen in my life.

“She’s got a great sense of humor and one of the most positive attitudes of anyone I’ve ever known. She always tries to look for the bright side and the humor in a situation.

“She loves her life, loves the people around her, loves her pets a lot. She is a person who just enjoys being happy.”

Anne-Marie has worn many hats in her life, and of course she takes her role as Mom very seriously. But she is also an incredible friend, an author and a poet, where her kindness manifests itself in her writing.

“Her ability to show you her heart is amazing,” Bill said.

Amazing is par for the course for a woman who has meant so much to those close to her. Anne-Marie continues to inspire her family with her honesty, integrity and compassion.

She celebrates her 69th birthday with loved ones who can only hope they give her a fraction of the love and inspiration she has always given them.

“Not a morning or day goes by that I don’t think about her multiple times in a day,” Bill said. “My greatest joy is when I see her happy and see her cared for. My happiest moments are when she is at her happiest.

“She’s brought so much into my life and changed it in so many dramatic ways. I just love her tremendously.”

“Mom, you know I love you and am thankful for everything you have given and taught me, “Evan said. “What never ceases to amaze me, however, is how I keep finding new ways in which you affected me both as a mother and as a person, ways that always feel like treasures. As I started to be able to relate more to you adult-to-adult, I realize that some of the greatest things you taught me weren’t explicitly said, but rather things I saw in you as a person and admired so much that I adopted them myself.

“You’re not just the best mom I could have asked for, you’re someone that I would hold as a shining example of both a best friend and, more importantly, role model.”

“I love her tremendously,” Julianne said. “She has passed on so many of her passions and talents to me: horses and horseback riding, art, a love for animals, her sense of humor and compassion. I’m so thankful for that and so thankful that she is my mom and for all of her support. She is the strongest person I know and she means the world to me.”